I’ve seen this meme on social media a few times. Each time it prompted passive thought about the topic, and sometimes a chuckle. 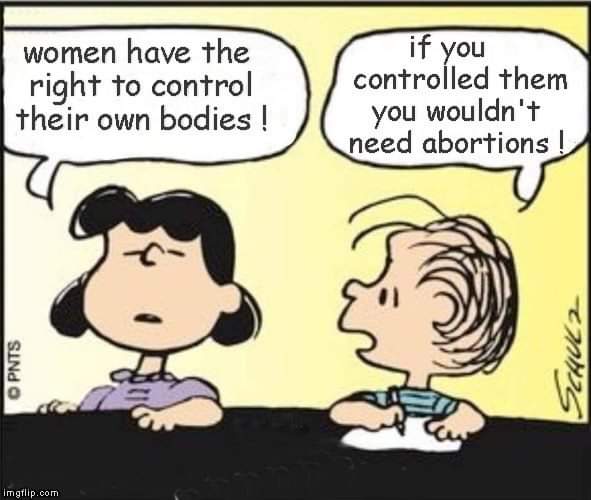 It’s so easy to get on a soapbox either for or against abortion when you’re not the one in the real world situation of having to choose what to do. Upon seeing this meme again last night, I stopped to think more deeply about it and where I would side in the debate. Of course, everyone has an opinion on it. And many “extremists” on both ends of the spectrum just love to shoot off their mouths so vigorously as if they are affected by it, just to hear themselves cheerlead from the sidelines. I don’t want to hear shit from them (at least not as anonymous visitors)!!!

Women impregnated from rape, incestuous molestation (as minors or other situation where they were forced) are an extreme but very real scenario. Nobody, NOBODY has a right to tell these women how to decide nor deny them that option. I believe in a higher power, God, but to those who say this and that about abortion being wrong and bring God’s name into it to save their argument, I say to you FUCK YOU. You are not St. Peter at the pearly gates into the kingdom, nor anyone’s mentor on how to. Let that judgement be made by the almighty himself directly with the woman who chose that life altering option. In the meantime, real world results of no choice can easily mean devastating social implications to the woman and her life, and ultimately we the taxpayers too. No it;’s not about money, it’s about forcing someone into a life they did not want. Enough said, if people can’t read enough into this to understand you probably shouldn’t be reading this post at this education level anyway.

For those situations not involving “victim” scenarios, where the situation was a result of an oops or change of mind sexual encounter result, well again, the possible social impact could be the same. Beyond that, maybe I should switch gears and go to the back room to finish off my thoughts, but I won’t…

Should someone pay for bad decisions for the rest of their lives? Those that say yes are armchair quarterbacks who’ve never been down that road, sanctimonious religion nuts who think they’re qualified to preach the word, which they aren’t. Father George, an ordained priest, preaches anti-abortion from the pulpit. You don’t see him holding up signs and protesting in public. Why? Because he tells his flock what the right life choices are, and lets his flock decide on a personal level whether to follow or not.

That’s my social take on it based on my down to earth logic. My personal one? That’s for Back Room topics…. 🙂

If you don’t like it, you have the right to justify YOUR life’s decisions. you have no right to attempt to impede on and justify someone else’s.