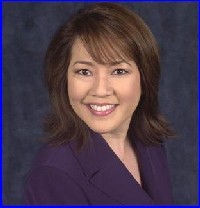 I didn’t know her personally or anything like that, but I saw her almost every night. Almost. Shari Shima was a familiar face on the local news channels I watched for years. Back in the early to mid 90s, co-worker used to argue as to whether Shari, on KITV, was prettier than Kimmie Gennaula at KGMB. I favored Kimmie but it was close call to me!

In the early 2000’s Shari seemed to either drop out of view or didn’t do the news or weather as much, and at times looked a bit rough and tired when she did once in a while. It didn’t occur to me that she had left TV broadcasting until I saw a post on Hawaii Threads forum, with people asking where she went, speculations, etc.. She was laid off when several stations consolidated under common ownership. That explains why she wasn’t on the tube anymore.

I surmise, as others do, that she had been sick. Upon her passing this past weekend, some who knew her said or alluded to her having some kind of health issue. No details have been revealed.

Rest in peace Shari. Hawaii broadcast journalism lost a good person a few years ago. The Hawaii community has lost a friendly smile in you.