Two weeks after the reflooring was completed and we have slowly moved the furniture and everything back in from the lanai, I took a look at how things blend. I’m a functional perspective person and matching/blending comes a distant second to me. So Lou picked out the flooring. I think it looks good. 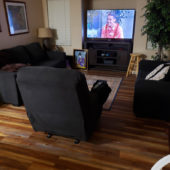 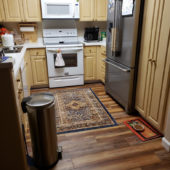 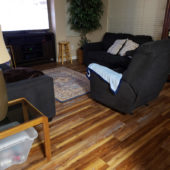 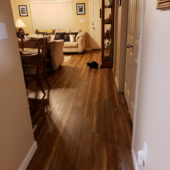 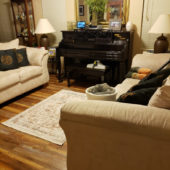 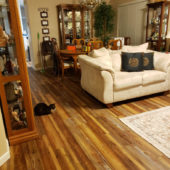 So, as a last look. When Lou decided she wanted to change out the carpet for hard flooring, more than a handful of friends and acquaintances mentioned:

This, to save money on labor costs, etc.. Just pull out carpet and take your time laying down the flooring panels, patience in cutting to fit. Well, I’m not that patient and even handed to do it myself to begin with. So we spent and we hired Arthur to do it. In watching him and his team do the job, I noted a bunch of things that they did, and explained, that I never would have done, had I done it myself “with such ease” as a bunch of people had said.

I remarked that had I done the work myself I would never have known all this. Arthur mentioned that most do-it-yourselfers find this out in planks buckling slightly close to walls if cut exactly snug to the walls. They notice, either immediately or in time, when walking on the floor some areas where they can feel or hear space between the flooring and the floor slab. That can be either, or both, from moisture or the deck not being flat enough that gaps were present when laying the flooring.