I don’t know why but every so often when I think back and review many of the teenage memories now getting vague, some of the not so positive flashbacks come embedded with the happy ones. Some I have to mentally wipe off the cobwebs to remember. The good and the bad, the positive and the negative, they all weave together to create more complete history.

This one I’d almost forgotten about until it came out in casual conversation I was having with a much older friend who happened to be close friends with one of the Superior Court judges back in the day. The infamous triple murder in Asan, Guam back in ’74. I wasn’t running with that crazy hazy crowd yet back then, and at my young age at the time it was something beyond me. As I got older and other crazy criminal acts were registering more in my everyday consciousness… this period being the post-Vietnam smack infested era… certain circles would talk about this tragedy. Some would claim inside scoop, others experience insight as to motivations, etc..

Two people were arrested for these murders, which was said to be fueled by heroin related situations. They were Frank “Country” Reyes and Steven Clay. Who Clay was, what he stood for, where he came from was never clear to me and I don’t recall anybody I ran around with knowing much about him either. Country, on the other hand, was of deeply rooted local family. People knew him. People were related to him. He was, as I recall, active in youth sports coaching or something like that. So ordinarily, finding him to be involved in such a heinous crime was puzzling at first glance. Adding smack into any equation totally changes things though, which I know from a very close perspective. Anyway, Country was convicted of the murders. Clay? He was acquitted. He then quickly left the island.

Long after I left the island to properly grow up, reports were/are that Country only served 7 years for his crimes. I’ve seen web forum/discussion comments voicing displeasure and even outrage that he got away with only 7 years. Maybe rightfully so. Maybe not. The story that had been the persistent and consistent one about this sad incident is that Country was the lesser culpable of the two accused. He was the “go along” guy who happened to be with Steven Clay, the evil one. And it was by design that Country took the fall and got convicted. Also by design was Clay’s acquittal. It’s been said that Clay was never seen again after leaving Guam. It’s been said that it’s because there was a hit on him and he got his justice in the eye for an eye way, courtesy of one of the victim’s fathers who was himself a Superior court judge during that time. And justice has in fact, been served appropriately.

40 years later, the someone I was in conversation with, in which this subject was brought up, acknowledges also having heard this “inside story”. And he is a generation older than me, in the same generation as the parents of the victims. Does that lend credence to the story? Hmm, don’t know. His circle of friends back then and to this day are what I call the more upper crust and not the gangstas I hung with who collectively had credibility issues.

But it does make sense. Always did to me…. 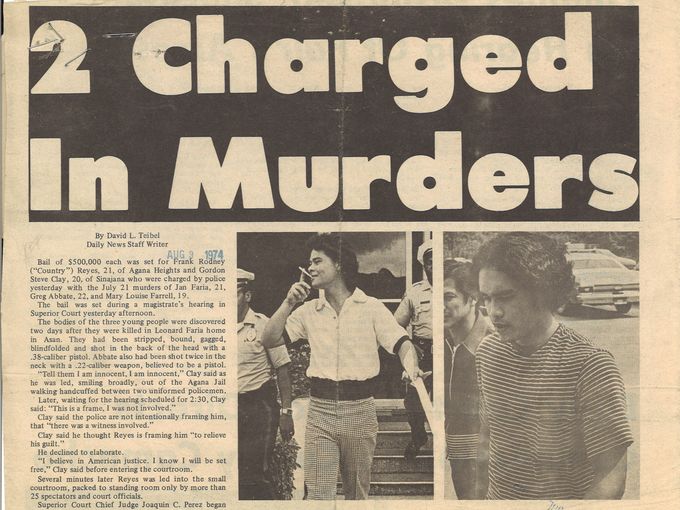